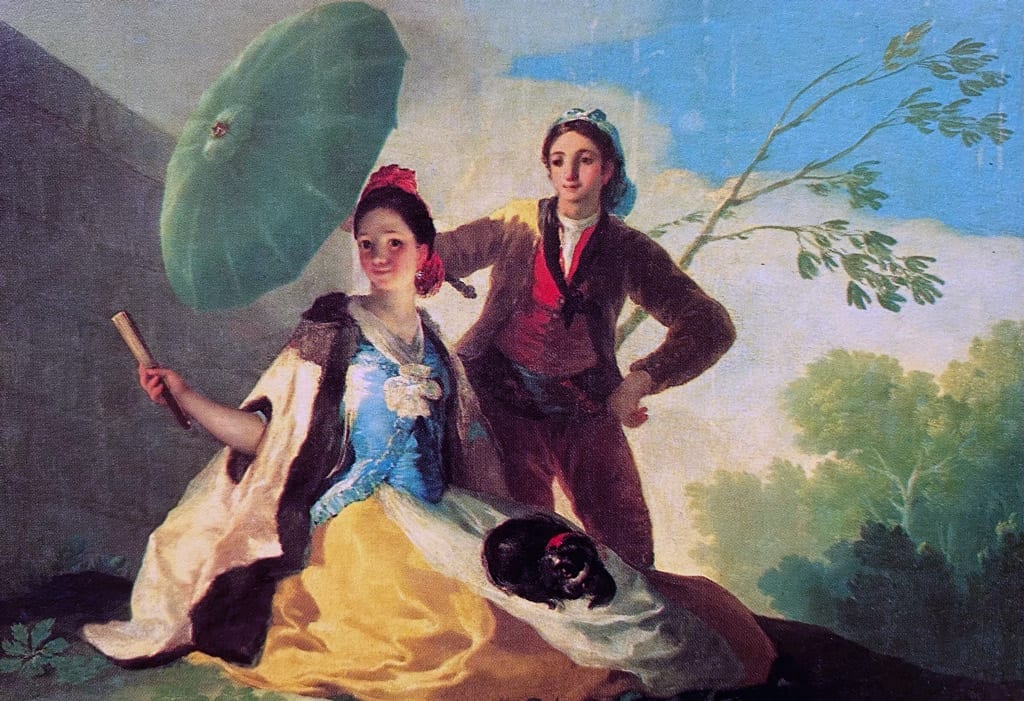 Contents for The Parasol painting by Goya include:

Bright hues draws us into the placid pair of Goya’s painting The Parasol. Their relationship, and the painting, seem simple at first. But the freshness of that yellow and brilliant blue draw our eyes deeper into the scene. Looking closer at the lemony skirt, we see it hosts a tiny dog. This represents a sense of duty and care for the young lady. The domesticated pup’s in that needy lapdog position. Such creatures are often like babies. So, it symbolizes the lovely lady’s role as mother and caretaker.

The young man at the back shields her with the parasol. He’s stuck behind her and likely a servant. She looks out to the distance, away from him. So, he seems unimportant to her in the scene. Like the closed fan in her hand, he might serve to keep her cool on a hot day. No need to feel sorry for him, though. This guy’s the lucky one. With a bit more scrutiny, we can unpack the true, trapped nature of the young woman’s situation.

That’s because the parasol doesn’t only shield her from sunlight. The whole world awaits out there, beyond her purview. After all, on her side of the painting she’s the sole colorful element. There’s just a blank grey wall behind her and a cloudy patch of sky. Her sunshine skirt provides the only light. In fact, as a woman of 1777, she was likely quite sheltered. The Parasol represents this inherent societal position. The bluish umbrella’s a close copy of a sky. Still, it’s not the real world, nor even as pretty a blue as the sky here. Only the young man has access to that. On his side we see lush greenery and brilliant skies. He’s got the whole world at his avail. Bleak grey surrounds our lady, though, like a prison.

It may seem dramatic to claim she’s imprisoned. After all, I even pointed out that he’s behind her. So, he seems less important. But he’s still male. His servitude has less import than his maleness. In fact, the servant boy has all the power in this painting. He holds The Parasol. This prevents the lovely lady from getting sun in her eyes. But he also shields her from seeing as much world as he can see. The Parasol isn’t the only thing in her way. The pup sits like an anvil in her lap. It represents responsibility. She must take care of this animal. No matter how cute it is – it’s holding her down. The servant also blocks her from seeing the lush greenery. Boy and dog both stand in her way.

But, I’m tempted to protest, she’s smiling. This lady seems happy, one might presume. It’s a sunny portrait on the surface. Look at that bright yellow flounce – so perky – like a daffodil around her. Also, her face appears placid. The skirt belongs to the lady, though. It’s her contribution to the scene. This happiness is yet another thing under her own care. As a woman in 1777, she had lots of responsibilities. Smiling was a duty too. When we look into her eyes, they’re more pained than pleased. She holds an uponed fan in front of her. This represents her true feelings – furled tight in our lady’s grip.


Francisco de Goya painted this only two years after joining Spain’s royal court. As court painter he often portrayed the stiffness of aristocrats. Goya also revelled in the rich details and vivid color of their finery. That lace kerchief blossom graces this lady’s breast with a rare and delicate quality. She wears many such treasures: sparkly earrings, a royal blue velvet vest, and a pair of rosy blooms in her hair. Her servant, though, wears all brown except for a jaunty red vest. That red bit may represent his dutiful bond to her. After all the vest color matches her hair blossoms. In fact, her vest color matches his head kerchief. So, this matching may be more than coincidence.


They are bound by the court and duty. He’s fine with his duty to the court. It’s only a job after all. He can leave it behind and go out to explore the world when he’s off duty. We see this essence of his freedom represented in the blue of his headscarf and patch of sun on his shoulder. Both draw him toward the bright and sunny sky on the painting’s right side. That’s why he’s positioned on this part of the painting. Of course, she also wears these colors. But she’s blocked from the right side of the painting. So, there’s no connection between her hopes and the actual world. His body and the dog both prevent her from heading in that direction. On her, these colors represent mere longing. She doesn’t have the freedom of opportunity her servant does.


That’s because her duty to the court never ends. She stays on duty day and night for the rest of her life. One day she may marry and see the world on the arm of a husband. The beautiful colors of her clothes represent this possibility. There’s also a small plant and patch of grass on the painting’s left bottom. This is my favorite part of the masterpiece The Parasol. It reminds me that Goya’s love of nature grew as his painting matured. So, it’s perfect that this early painting showcases a tiny plant. I say ‘showcase” because these small six leaves symbolize our lady’s hope. It’s evident she wants more. But this small bit of greenery represents that possibility. Plants grow and it points to hope that more possibilities will open up for her to live a lush, full, life someday.

Where can I see The Parasol painting by Francisco de Goya in person?

Madrid, Spain has one of the world’s finest museums, Museo del Prado. It’s also known as the Prado Museum or Museo Nacional del Prado. If you love Goya and Velázquez, this is the museum for you. In fact, this museum exhibits more Francisco de Goya paintings than those of any other painter. The Prado also houses the most Italian masterpieces of any museum outside Italy. It’s a bucket list museum for any fine art lover.

The Parasol in Spanish is El Quitasol. This means Sun Visor. So, you can visit their online page for the painting under Sun Visor. Or just click my link. One of the coolest parts of the Prado Museum website is their timeline. For every painting visitors can click to see it on a timeline. This places it next to many artworks from that particular time period by other painters. It’s a wonderful way to see each piece within a specific time frame. This frees us from our limitation of seeing masterpieces one by one. It lifts the parasol of our isolation away so that we better understand the context around these paintings.

Why was Francisco de Goya an important painter?

Goya’s full name is actually Francisco de Goya y Lucientes. So, it’s no surprise that many now shorten it to the simple “Goya”. There are two primary reasons Goya plays a key role in art history. As a painter in the Spanish royal court, he wielded great influence. During the late 1700s and early 1800s Goya worked for the King as well as the court and aristocrat clients. Even though he lost his hearing to illness during this period, Goya retained his expressive power. He’s often called the “last Old Master” as well as the “father of Modern Art”. That’s because his career bridged the two periods and he held a strong position throughout.

So, his eminent role cements Goya into art world canon. But he was also important because his work changed so much over his long career. He started painting and drawing in the early 1770s and retired in 1824. It’s extraordinary for any artist to stay relevant for such a long time. Goya was able to because he changed his style and temperament on the regular. He was the Madonna of the Spanish Enlightenment. He helped spark this movement with riveting portraits of the elite and fantastical etchings.

His work eventually became what we would call “edgy” in today’s lingo. Goya had a dark side. When he started in the royal court Goya painted cartoon tapestries. They were colorful depictions of everyday activities. By the end of his painting career, Francisco de Goya had also imbued his work with varying emotion. Goya created his last work in Quinta del Sordo (Deaf Man’s House). Now known as the Black Paintings, their dark mood growls. This work’s a million miles from the bright twinkling color of The Parasol.

What kind of painting is The Parasol by Goya?

The Parasol was one of the early cartoon paintings Francisco de Goya did for the royal court. It’s a perfect example of how those pieces celebrated everyday moments. Goya showed brilliant creativity and originality in these works. His whimsical captures of fleeting moments on canvas remain one-of-a-kind. As much as he loved to learn from his fellows, like Velázquez, Goya was also a true original. Even when he copied, he painted as only Goya could.

Was Goya’s early painting The Parasol significant in his career?

Yes. The Parasol was Goya’s breakout painting. What the song Like a Virgin did for Madonna, The Parasol did for Goya.

ENJOYED THIS The Parasol ANALYSIS?

Goya: Crazy Like a Genius (2002), a documentary by Ian MacMillan, presented by Robert Hughes