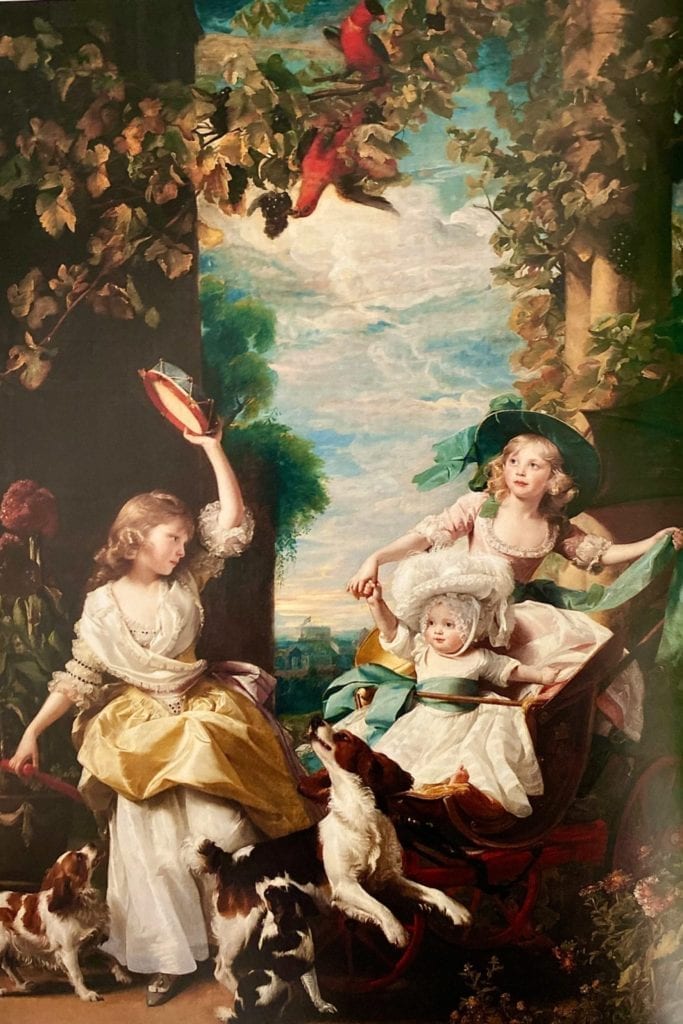 Table of contents for this post on The Three Youngest Daughters of George III.

There’s delight in the details of The Three Youngest Daughters of George III. It starts with the sublime specificity of that title. George III had the most children of any British King in history – 15. So, to be his three youngest daughters was special. Being the baby always is. But after a literal dozen other kids? That’s a peak princess pampering situation. This painting proves that theory too. Of course, all these kids likely contributed to his alleged “madness”. Yes, he’s that King George.


A castle teeming with that many kids abounds with excess. That’s the special sauce in The Three Youngest Daughters of George III. This portrait flourishes with indulgence. John Singleton Copley even frames the trio in multiples. He surrounds all three with a delicate leaf garland. But the American painter also frames each individual child. Princess Mary with the tambourine sets the most obvious example. Copley gives her a solid wall background. She’s the eldest sister and most engaged in her own thing. Mary plays music and pulls the carriage where her sisters sit.


Check out the red handle in her hand. This color connects her with the scene in several ways. Red birds above sing along with her scarlet tambourine. Also, Mary’s sisters ride in the red-wheeled cart. She leads with this guiding hand and her music. Mary’s younger sisters wear face framing hats. The elder of the two, Sophia, also holds baby Amelia’s, hat ribbon. She pulls it to the side. Thus, Sophia takes charge of framing her sister within the portrait as well.

But the best part of this painting sits at the bottom. The three royal Springer Spaniels enliven this already chaotic painting. Copley captures two of them in motion. This adds puppy energy to the scene’s already charming disorder. The Three Youngest Daughters of George III also resonates family connection. So, this combination of chaos and harmony balances the scene. Three dogs parallel a trio of sisters. Copley sets them in a space that straddles indoor and outdoor areas as well. This grounds the girls in the real world. They’re not fairytale princesses hidden away in a castle.


That’s the grandest privilege in this piece. These young children didn’t have to pose – motionless. They’re more real to us thanks to that. Most portraits, even of children, from the 1700s were much more formal. It’s part of why kids seem more like adults in those paintings. They had to fake it and force expressions to suit the artist over many sessions. This practice robs subjects of spontaneity. But these three children have the natural ease of a photograph. Their soft curls appear to dance. Baby Amelia seems to react to Mary’s tambourine. Sophia sways to the beat. It’s a gentle action scene and extraordinary feat for an 18th century oil painting.

Still, The Three Youngest Daughters of George III epitomizes the era. 1785 was the peak of Neoclassicism in Western painting. This masterpiece delights viewers with a perfect example of the style. Neoclassicist paintings share three main attributes. They portray classical subjects in a linear manner. Neoclassicism also harkens to Greek and Roman antiquity with its priorities. That means, clarity, harmony, and restraint with idealism.

But the most Neoclassicist aspect of this portrait is archeological accuracy. It also heightens the pull of this painting. We’re drawn in by the spectacle and material details. After all, most people would love a chance to peek behind the curtain into a royal household. Add a baby and puppies to the mix and you’ve got a hit on your hands. Best of all, John Singleton Copley draws it still further. His sensitive, individual takes on each child and keen specifics draw us into the scene. It feels like we’re there. As much as it’s extravagant, Copley also keeps it real in this masterpiece.

Where can I see Copley’s The Three Youngest Daughters of George III in person?

You might think that this royal painting is only for British royal eyes. But even I, an American plebeian, have seen it in person. In the early 1990’s this painting featured in a University of Virginia exhibit. High Style and Vernacular Art: Art for Americans in the Age of Jefferson (1750 – 1850) opened my eyes. Through this show, I started to understand the importance of archeology in artwork. If viewers notice specific materials in the painting, they may interpret the meaning that artists wish to convey.

Viewers can also often see The Three Youngest Daughters of George III in England. For instance, there was a showing in 2014 thanks to a Royal Collection Trust exhibit. Art exhibits like this one help make Buckingham Palace seem a bit more approachable. But they also remind viewers of the alien and imperious lifestyles of royals – even as children. The Royal Childhood show as well as the UVA exhibit both featured work by another of my favorite painters, Benjamin West.

Who are the princesses in The Three Youngest Daughters of George III?

These three girls grew up in the shadow of their father, King George III’s, madness. Of course, there’s not a hint of this trauma in the painting. But we know from history how George III suffered. Doctors continue to debate with what, though. They all agree that his illness presented as mental. Still, it could have been a blood disorder that made him act this way. We may never know its true cause with certainty. What’s clear, though, is that his wild behavior impacted his family.

For instance, the King and Queen over-protected their daughters. They didn’t want them to marry. The youngest daughter, Amelia was just a baby in The Three Youngest Daughters of George III. She also died young from TB. Before her death she fell in love and wished to marry. But the royal couple didn’t approve and she died unwed. Her older sister, Sophia, also didn’t marry. She’s the one holding Amelia’s ribbon in the painting. But Tambourine Mary did have a chance to wed. Too bad it was to her cousin, Prince William Frederick, Duke of Gloucester and Edinburgh. Also, Mary was his second choice after his proposal to her older sister Charlotte didn’t work out.

For more gruesome and glorious stories about all six daughters of George the third, check out The Daughters of George III: Sisters and Princesses. It’s a fantastic book by Catherine Curzon. One of the sisters inspired a character in the Netflix series Bridgerton. So, you know this book’s got drama.

Why did a British King choose an American painter for a royal portrait?

John Singleton Copley was an extraordinary portrait painter. He moved to England while the American Revolution brewed in Boston Harbor. But before leaving with his Tory wife, Copley made a name for himself in American portraits. These include the formidable Paul Revere.

England knew about his mastery even before he moved to England. That’s because his portrait A Boy with a Flying Squirrel had already made a splash there. Copley’s painter buddy, Benjamin West got this gorgeous piece into the British exhibition of the year – 1766. It created such a buzz that Copley got oodles of letters urging him to move across the pond.

Such invitations continued in earnest. So, after marrying into a Tory family, he answered the call and moved to England in 1774. Copley then honed his craft while traveling across Europe and painting beloved portraits. This built his reputation over the next ten years until he reached the pinnacle and painted The Three Youngest Daughters of George III for the King in 1784. He finished this masterpiece in 1785.

Amelia according to the Royal Collection Trust