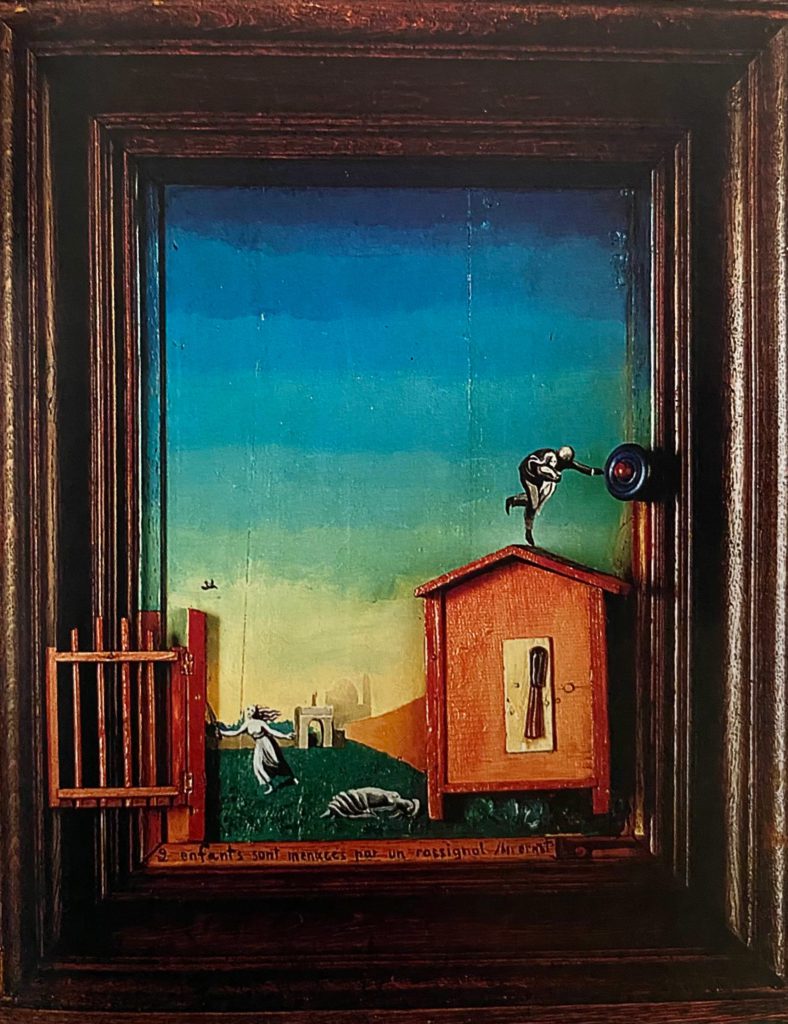 Why is Two Children Are Threatened by a Nightingale a masterpiece?

Although Max Ernst spoke of himself in the third person, his paintings are charming. Take Two Children Are Threatened by a Nightingale. The title sounds ominous. But this painting feels more like a whimsical dream. It portrays a fantastical scene through a disruptive frame. That’s how Ernst challenges the Renaissance framing ideal.


In that tradition, paintings were a window into reality. Ernst breaks reality’s rules. Then he also messes with the frame itself. So, the artwork carries viewers into an alternate world. He helped lay a foundation for Surrealism with this inventive piece. That tiny bird’s my favorite part of Two Children Are Threatened by a Nightingale.


Ernst gives us a realistic background. From his bright hombre sky to the faraway nightingale. This sets the landscape in our world. Yet at front Ernst disconnects viewers from that grounded scene. He breaks with conventionality. The human figures are sketchy in both senses of the word. They’re vague and odd. It’s a confusing combination against the bright background.


One figure teeters on a rooftop. Another dances near a crumpled third laid in the grass. All three are black and white. But the world around them glows in vivid color. Ernst’s figurative trio raises many questions. Which are the two children in the title? Why do they appear to be adults? How is that small, distant bird a threat?

Ernst sets a classic example of Surrealism with this ambiguous title. Challenging the viewer lies at the heart of Surrealist intent. It’s all about breaking preconceived ideas into bits. Surrealists provoke imbalance with a purpose. They want to point out absurdity and incongruity. These aspects of art and life stimulate imagination and questions. Such are the Surrealist bare necessities. In fact, these very qualities are what raised condemnation in Nazi Germany.


This started with mere ridicule from European and American art critics. But it escalated to denunciation when Hitler came to power. A failed aspiring artist, Hitler labeled avant-garde artwork “degenerate”. Surrealism didn’t abide classical rules which he considered the “aryan ideal”. His definition of degenerate art included “destruction or confusion of natural form”.
Hitler lived in his own dream world, where he dictated worthy art. But Surrealist art ruptures every traditional Nazi notion.


Not only does it break the rules, challenging that status quo is the whole point. A quick glance at Two Children Are Threatened by a Nightingale shows why it fits on the Nazi naughty list. But this masterpiece wasn’t alone. Hilter’s soldiers confiscated 16,000+ pieces of so-called “degenerate art”. Considered “inferior” by Nazis, these represent exceptional artworks of the 20th century. German painter Ernst broke the very mold that Hitler wished to canonize.


Elements that the Nazis find inferior include the breakage of traditional framing ideals. It’s these bits that make Two Children Are Threatened by a Nightingale special. For instance, Ernst adds a tiny wood fence and house to disrupt the classical frame. He inserts an actual knob on the building’s roof. This nubbin pokes out of the painting – a surprise. The charming red and blue protrusion offers us a tactile gift. Of course, we can’t touch it. But it’s a powerful pull. My hand jumps a bit every time I see this masterpiece. That’s how much I want to reach out to it.

The nub casts a shadow on the frame. So does the wooden shed beneath it. But Ernst’s fence brings the coolest physicality to the frame. He dangles this classic yard fence open. This invites us into the scene. It’s a tangible tease. Much like the knob. Though it presents a classic invitation, the party’s only a dream. I love this playful take on tradition. Two Children Are Threatened by a Nightingale epitomizes the artistic trope – know the rules well, so you can break them even better.

Two Children Are Threatened by a Nightingale – FAQs

Where can I see Two Children Are Threatened by a Nightingale in person?

I recommend anyone interested in Surrealism check out the exhibit at MOMA. It’s an absolute revelation. The shadow boxes, objects, and paintings offer a cohesive Surrealist set. I love reading as much as any human. But there’s nothing like experiencing these pieces in person. Surrealism offers whimsical fun like no other art genre.

So, next time you’re in New York City, visit the Museum of Modern Art. If you can’t wait that long, you’ll find lots of inspiration on the website. The site includes a thorough Surrealism research and learning section.

What happened with the confiscated “degenerate” art during WWII?

Hitler created two opposing exhibits using these stolen artworks. He put all of them in one labeled “degenerate”. This opposed another collection he fostered called “Great German Art”. He set these conservative works against modernists as an attempt to mock the latter.

Sadly, it didn’t end there. Hitler persecuted and attacked avant garde artists. They were relentless to the point that many, like Max Beckmann, fled. Some also succumbed. For instance, Ernst Kirchner. He burned most of his artwork and took his own life.

What inspired Ernst to paint Two Children Are Threatened by a Nightingale?

Ernst started as a Dadaist. He met Surrealist founder André Breton in 1920 and advocated for his ideas through art. Ernst already loved to incorporate found objects into artwork. So, he combined Surrealist ideals with this fancy.

He mixed fantastical worlds and tangible realities as well as methods. Ernst’s work thus feels like it’s urging viewers to play along. The game’s on and it’s never been more delightful. Best part is, there’s meaning in all this madness too. All it takes is a deeper look into Two Children Are Threatened by a Nightingale.

ENJOYED THIS Two Children Are Threatened by a Nightingale ANALYSIS?

Warlick, M.E. 2001. Max Ernst and Alchemy: a Magician in Search of Myth

Max Ernst Retrospective at The Met