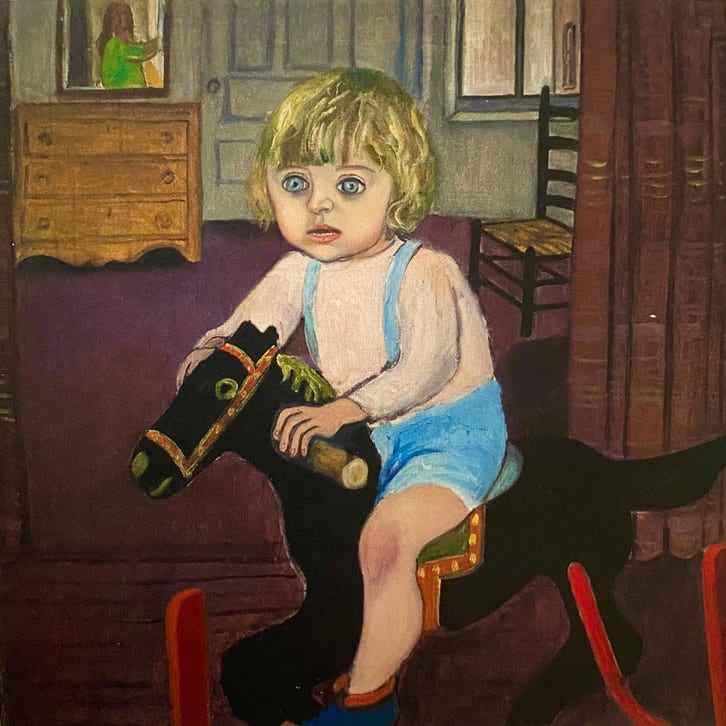 Table of contents for Hartley on the Rocking Horse by Alice Neel.

Alice Neel’s painting Hartley on the Rocking Horse harkens to Renaissance practices. But it’s also cutting edge and timeless. Neel achieves this with what she calls the “awful dichotomy”. It’s the inherent tension between artistry and motherhood. Alice Neel’s work remains relevant and relatable. That’s because her work’s grounded in real life. Neel painted at home. She raised her children and worked in the same space. This creates an inextricable connection. Neel’s artwork links to her domestic duties. That’s the dual struggle she (and many women) face.


Motherhood and a professional painting career aren’t easy to swing. That’s even more true when doing both at the same time in a small apartment. This situation points out the “awful” part Neel spoke about. It’s a relentless push and pull for women with children to create art at home. The work calls. But childrens’ cries are more compelling. When both share the same room …drama ensues. Alice Neel portrayed this in Hartley on the Rocking Horse. She revealed her two sides in this one painting: artist and mother. That’s what makes this a special piece.


Neel uses a traditional method for this revelation. She paints herself in a mirror. This technique parallels the classic painting Las Meninas by Diego Velázquez. The Spanish master also painted his own reflection into that portrait. It shows his place within the royal household he portrayed. Neel was familiar with Art History. So, this was likely a conscious painting choice. In Hartley on the Rocking Horse she’s at work; arm lifted with a paintbrush. It echoes the Diego Velázquez pose in his masterpiece. Neel also puts herself way at the back of the space – like Velázquez did in Las Meninas. Both of the artists show themselves in the act of creation. Of course, Neel produced both the painting itself and the boy in it. In fact, she also found the rocking horse on the sidewalk and refurbished it. So, she’s a three time creator in this piece.

Time and Attention with Alice Neel

The prevalent insight I see in Hartley on the Rocking Horse concerns time and attention. Children and art both need attention. In fact, the more time and focus we give to each, the better our outcomes. Kids thrive with thoughtful focus. And art is better understood with careful consideration. In fact, Alice Neel’s work was often dismissed during her lifetime for this reason. She was ahead of her time. Still in the art world Neel heard a lot of criticism like, “Nobody wants to buy portraits of people they don’t know”. That blasé attitude was due to lack of scope. Her paintings are an artisanal selection of artists, feminists, and intellectuals. Neel created an eclectic community time capsule with these careful portrayals. Her critics weren’t looking deep enough.


Neel’s keen artistry spotlights her son in Hartley on the Rocking Horse. She’s in the background for good reason. His bright eyes widen like blue saucers. That’s because he’s gazing at his mother. We can see her in the mirror. But he looks right at her. Hartley’s mouth half opens – about to say something. He clutches the rocking horse handles tight. We sense tension in his little body. Even though Hartley’s on a static rocking horse, he’s active. That’s where he focuses. Hartley’s a bundle of toddler action. Meanwhile, Neel, in the mirror, moves with careful consideration. She’s calm and attentive. While Hartley’s wild-eyed, his mom’s working two jobs. Neel’s paintbrush captures the moment while her eyes stay rapt in Hartley’s experience.


She found a way to bring her dual worlds together in this painting. We see how Neel hones her energy into a masterpiece. Combining the toil of artwork and motherhood isn’t always an “awful dichotomy”. At times it’s glorious. Viewers only need look into Hartley on the Rocking Horse. Moments like this one reflect that contradiction in parenting. Fun times are that much greater when they follow the less stellar ones. Like the back and forth on a rocking horse, it’s up and down.


Neel relishes her domestic setting as well. We see this with every painting in her NYC apartment. They’re an intimate peek into her world. She shares a private life with us through paint. In Hartley on the Rocking Horse that includes her two year old and his toy. But also some of their furniture and even her artistic process. Neel’s act of creation conveys my favorite part of this piece. It’s the only Alice Neel painting where she’s this open and giving. She did other self portraits and many family paintings. There’s even another painting where she includes a reflection of herself – Margaret Evans Pregnant (1978). But it’s only the back of her head.

Neel’s halfway involved in that piece. It points to her role as a woman painter. Neel enriches the art world with a profound, feminine take on pregnant bodies. She portrays pregnancy with candor and refreshing realism. There’s no filter with Alice Neel. Her real people show the truth of what pregnant women actually look like. Best part is, her artistry emboldens women.

For instance, Margaret Evans bares her enormous belly to us with confidence. She’s beautiful and relatable, bursting with literal motherhood. Neel’s Margaret Evans Pregnant role stays in the background, like wallpaper. It’s a tiny reminder that she was once pregnant too. However, Alice Neel faces us in Hartley on the Rocking Horse. She’s all in on this scene. This masterpiece stands out as a gem thanks to her generosity.

Hartley on the Rocking Horse – FAQs

Where can I see Alice Neel’s painting Hartley on the Rocking Horse? 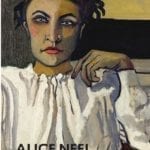 If you can’t see it in person at the Metropolitan Museum of Art, get the book. I went to the exhibit with Neel’s vibrant, emotive portraits. It moved me to buy the book associated with the collection. Alice Neel: People Come First lays out the wonder of the exhibit with clarity and insight. The pictures fill pages. So, you get an aerial shot at them. There’s also insightful writing to accompany the works and help art lovers understand the collection’s story. This helps put paintings like Hartley on the Rocking Horse in perspective.

It may seem on the surface that Alice Neel lived in a bubble. She painted the people in her life and did so in her home. But this American painter was also a complex woman. Reading this book inspired me to return to the exhibit with fresh eyes. Also, this collection felt like a refreshing splash after a long, hot beach day. Neel’s work brightens the Met with a feminine outlook on women’s bodies. It’s more relevant than ever.

Who’s the toddler Hartley in Hartley on the Rocking Horse?

At the time of the painting, Alice Neel’s son, Hartley, was two years old. She named him after her older brother. Hartley was also her mother’s maiden name. So, it had a double dose of meaning to Neel. She had Hartley with her lover, Sam Brody, in 1941. Before this Neel had a whole other life with her first husband, Cuban painter Carlos Enriquez. That marriage traumatized Neel in several ways. Her first baby died. Then Carlos took away their second child, never to return. So, it’s not a huge surprise that Neel might hesitate to marry again.

Hartley and his brother didn’t choose the paths Neel wanted for them. She wanted Hartley to become a ballet dancer and Richard to be a pianist. Instead, they disappointed her and became a doctor and lawyer. But her children grew up to honor their mother with retrospectives. In fact, her grandchild, Andrew, even made a documentary called Alice Neel about her groundbreaking artwork.

Why is Alice Neel an important painter? 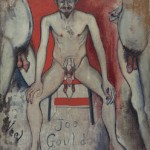 There are many ways Alice Neel’s work epitomizes feminist ideals. She’s a standout in Art History for psychological acumen and insight. That’s because her portraits convey a depth of understanding and poignance. They’re not always kind. But her work’s considered and pointed.

This garnered her criticism for most of her career. But Neel’s glory days followed. Her scandalous portrait of Joe Gould with multiple penisis now looks bold and precient. His inflated ego was eventually common knowledge. At the time she painted Gould, though – 1933, her portrait was a shocker. It’s a perfect example of a feminist take on portraiture. Neel saw Gould for who he was long before the rest of the world. She embodied a brilliant contradiction – the down to earth visionary.

ENJOYED THIS Hartley on the Rocking Horse ANALYSIS?

Check out these other essays on Portrait painters.

Hartley on the Rocking Horse at the Alice Neel Met Exhibit