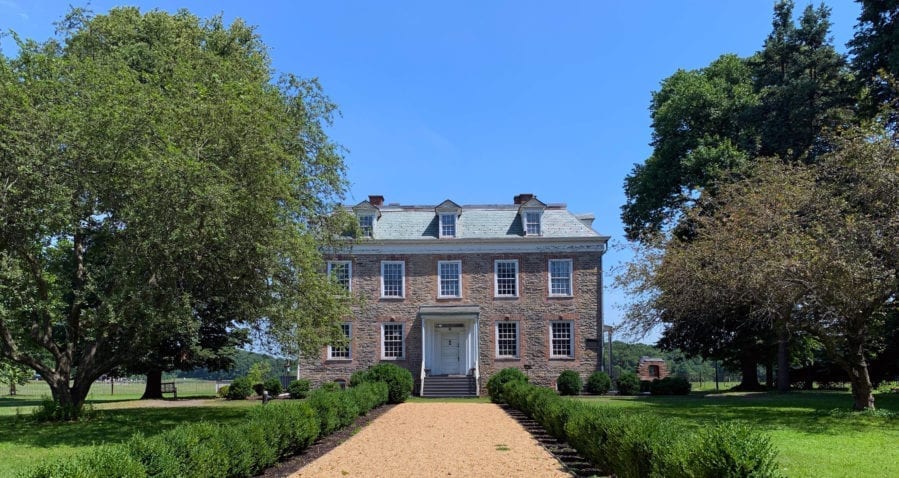 The Bronx holds no greater surprise than the exquisite Van Cortlandt House Museum. Its wide berth makes the estate a standout of bold beauty in the NYC borough. History lives behind this gate on a fresh green lawn. It’s an elegant estate – like a cake topper for the big city below.

The Van Cortland House ran a profitable wheat plantation. They built barns, mills, and a dam that would turn a tiny brook into a lake. Enslaved household members did all this work for the Van Cortlandt family. In fact, the estate’s original owner, Jacobus, never even lived on this land. It was pure investment for him. But Van Cortlandt House became a true home for many of his descendants. One such family member, Augustus, played a crucial role in New York history.

The last male to hold the Van Cortlandt name, Augustus made his mark. Augustus Van Cortlandt lived in lower Manhattan and worked as Common Clerk for the City of New York. Though it’s a humble title, this was a prestigious and important job at the time. Augustus had studied law under his Uncle, John Chambers, and passed the NYC bar. He held the Common Clerk position for 32 years between 1751 and 1783.

Given that England ruled the colonies, Augustus worked for the British at first. In 1775 New York formed a Provincial Congress. That was a special revolutionary group subset of colonists. This group tested Augustus’s loyalty in the summer of ’75. They asked him to safeguard the NYC public records. In other words, hide them from British eyes. He worked for the British. But his entire life was set up as an American colonist.

A torn Augustus secreted the records. At first he still lived in what’s now the Financial District of Manhattan. It’s still where the courts lie today. So, he hid them in his home at that time. But Augustus later buried them on the plantation at Van Cortlandt House. This made sense because he moved up there himself when he inherited the vast estate. Augustus earned quite a lot of positive karma from this act. He even lived to the impressive age of 95. It’s a near miracle for those days when the average life span was about half that.

The Van Cortlandt House Master Bedroom showcases a resplendent four poster canopy. It’s unlike anything you’ll find at Bed Bath & Beyond. The Van Cortlandt family used linens from the Dutch West India Company. Only the best would do for George Washington’s bed. When you visit the Van Cortlandt House Museum, check out the gorgeous bedding. They recreated exquisite patterns from the Dutch West India Company archival patterns. Of course, this is only one example of many imported goods from this company. They also specialized in spices, sugarcane, and wine.

The Dutch West India Company held tremendous power in the 1700s. Lucky for us, they wielded it over the U.S. with some integrity. Our colonies were far from self-sustaining in those days. Import/exports with foreign friends made a difference in everyday life. They were also central in America’s economic stability. Countries like Holland and England held the most cards in our trade game.

But it’s not only goods that matter. Principles are major components to a life worth living. The Dutch West India Company played a crucial role in a key American principle as well. Freedom of religion was a primary reason why many early immigrants came to the United States. Thus, it was frustrating when Peter Stuyvesant, then Governor of New Netherland, prevented Quakers from meeting to practice their religion.

Quaker John Bowne went to Holland and met with the Dutch West India Company. He convinced them that the Quakers of New Netherland deserved the right to meet. Thanks to his articulate appeal, the company urged Stuyvesant to change his tune. Given that they were a primary trade partner, it worked like magic. Bowne’s appeal came in handy when the framers later wrote our Constitution. They used it as a basis for the guaranteed freedoms of religion, speech, and assembly.

We can see from this how much money mattered to Peter Stuyvesant. It’s ironic that it took the era’s richest corporation to remind him principles matter too.

There are many exquisite rooms to visit at the landmark Van Cortlandt House Museum. But the Informal Parlor was my favorite by far. It feels so real. That’s even before you find out the cool story behind the vibrant paint colors. Turns out, science painted these extraordinary hues. That’s because museum workers had microscopic paint chips from the original room analyzed. At that molecular level scientists thus recreated the original parlor’s colors. So, your visit to this wondrous Historic House Museum feels all the more authentic.

Historic blue and orange enliven what it must have been like to chill with George Washington. He visited here for quite some time. So, it’s certain Washington sat in this room and gazed upon that very same pumpkin shutter. Visit history here and see for yourself. Even in this most informal room, Van Cortlandt House Museum overwhelms with elegance. It sits in what’s now known as Van Cortlandt Park in the Bronx.

But you don’t have to come to NYC to visit. Van Cortlandt House Museum also offers a virtual tour on their site. So, anyone from anywhere in the world can visit history here. Take a look with a click through this link. See for yourself the meticulous restoration and care of this extraordinary house.

Thanks to my partnership with Historic House Trust of NYC, I get to see living history up close and personal. The Van Cortlandt House Museum is just one of their 23 historic home sites across NYC’s 5 boroughs. Travel 367 years of history right along with me! Check ‘em out on Instagram and at their website – https://historichousetrust.org/. I’d love to see you at one of their fantastic sites. Each visit brings new experiences and gripping stories that stay with you. I’m so grateful to HHTC for all the incredible work they do keeping history alive. They make it such fun!