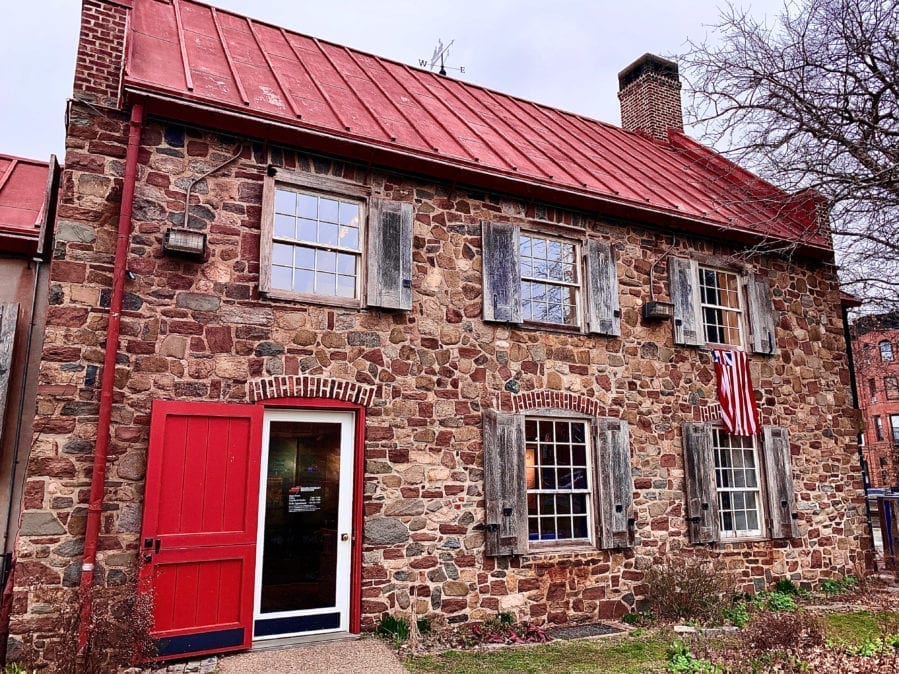 Kid-friendly and communal, The Old Stone House breaks the Historic House mold. Its location, Park Slope, Brooklyn, has been kidfabulous for decades. It’s a challenge to find an NYC neighborhood with more double strollers on the sidewalks. But the location perfection goes even deeper for OSH. That’s because it sits in the middle of a public park with a playground as well. So, Old Stone House functions as safe harbor with a side order of local history when sudden rains hit.

This historic structure keeps it real. There’s no pretension and nothing’s precious. Part of that lies in its lack of artifacts. Most historic houses raise barriers between visitors and exhibits. That means often taking pictures through metal gates or craning your neck to get a good look. There’s none of that at The Old Stone House. Other historic houses display relevant period pieces and portray domestic scenarios. We visit these to experience what it was like to live in that time and place. But OSH plays it a bit different.

There’s lots to learn and fun interactive activities for all ages. The Old Stone House played a critical role in the Battle of Brooklyn. So, there’s a wall-sized digital re-enactment of the battle that plays it out on a dynamic visual screen. It’s perfect for kids. Learning happens through repetition and experience. Don’t worry if you miss some of the battle details in the first telling. It happens here again and again. We can replay how crucial the Old Stone House was in the Battle; watching it all go down in digital splendor.

Speaking of playing out, every summer re-enactors do The Battle of Brooklyn near Green-Wood Cemetery. This Revolutionary War reenactment brings the event to life. Fantastic period uniforms, guns, and cannons transport you to 1776. The re-enactors even include a regiment that represents the heroes from The Old Stone House. Back then it was called the Vechte-Cortelyou House. These heroes, the Maryland 400 Regiment, sacrificed themselves for the sake of Liberty.

Two hundred fifty six Maryland troops died in front of the Old Stone House. They shielded the rest of Washington’s men. So, the patriot loss was great. But it wasn’t total devastation thanks to their bravery. Without this sacrifice, it’s unlikely our troops could’ve escaped across the Gowanus Canal. Fewer than a dozen of the Maryland 400 made it back to the American lines.

The Battle of Brooklyn was the first fight of the Revolutionary War. At the end of it Washington retreated with reluctance. He lost New York City to British occupation. This battle taught our troops that we faced a brutal and bloody war ahead. Washington was thus determined from that day forward to regain the city. He thought of little else. This obsession served him as he strategized and plotted his way to eventual victory. A visit to The Old Stone House serves as a fun learning tool about the fight that first inspired him.

One of the joys at The Old Stone House in Brooklyn brightens the second floor. Alicia Grullón’s artwork fills the event space with thoughtful insight and beauty. Her exhibition feels new and evokes local history all at once. Grullón explores identity and presence vs. absence as well. In fact, Presence, the collection’s title, resonates from every work. Grullón portrays herself in various times and places. She does this with immersion, costume, and culture.

OSH’s illuminating exhibits and guides aren’t the only reason to visit, though. That exhibit space works on many levels. It’s perfect for parties and other celebrations. In fact, The Old Stone House offers community events including many that are family friendly. For instance, a hearty romp into historically relevant arts and crafts. Some get deeper into history or introduce visitors to esteemed locals. They host everything from book launches to cocktail parties. There’s always a new reason to visit The Old Stone House around the corner. Check out their site at www.theoldstonehouse.org to see for yourself.

Where is the Old Stone House in Brooklyn?

Why is it called The Old Stone House?

In the mid 1800s many homes in the area were buried due to the soft, marshy earth. OSH was one such house. But in the early 1930s the city dug up these old stones and rebuilt the house to match its original. Now it’s 70% made from these original stones.

When was the Old Stone House built?

The original structure was built in 1699. But then it was reconstructed in its current form and position in 1933.

Was it the Battle of Brooklyn or Long Island? Both show up in searches.

Actually, it’s both. Back when the Revolutionary War raged across New York City, it was Long Island. But the location’s Brooklyn now. So, historical documents will call it the Battle of Long Island. Modern pieces about the event usually refer to the Battle of Brooklyn.

Thanks to my partnership with Historic House Trust of NYC, I get to see living history up close and personal. The Old Stone House is just one of their 23 historic sites across NYC’s 5 boroughs. Travel 367 years of history right along with me!

Check ‘em out on Instagram and at their website, historichousetrust.org. I’d love to see you at one of their fantastic sites. Each visit brings new experiences and gripping stories that stay with you. I’m so grateful to HHTC for all the incredible work they do keeping history alive. They make it tremendous fun!