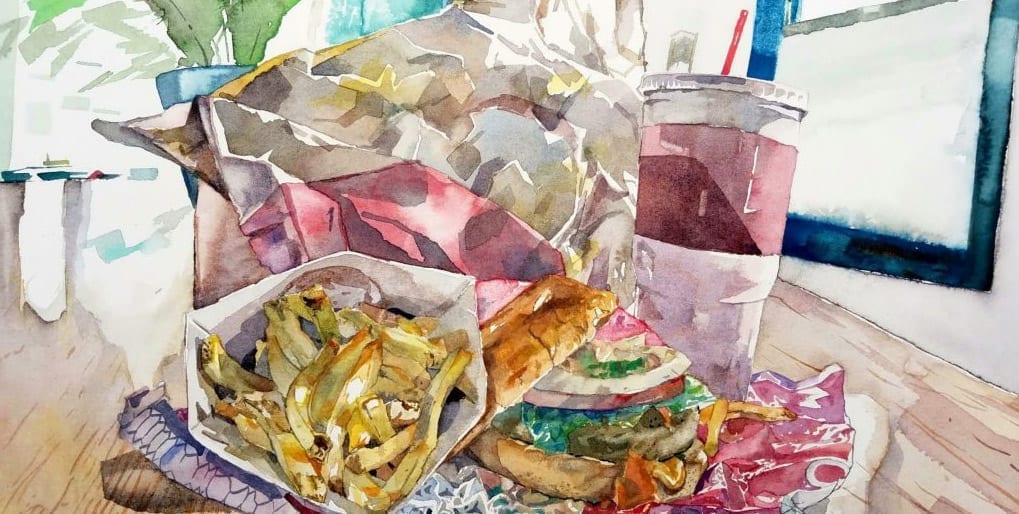 Watercolors are often lighthearted romps. After all, the medium demands soft brushstrokes. Colors only darken with layering or mixing mediums. WaterColor by Antonio works both ways. Realistic detail and heavy paint often add weight to figurative pieces. But Antonio González García lifts and lightens bodies with his work. There’s profound depth as well. That’s because strong lines and archetypal themes ground the work.

Antonio’s paintings are intense thanks to his process too. Check out his Instagram to see this in action. In fact, that’s what drew me to WaterColor by Antonio in the first place. García shares process vids along the way while he creates and shares with admirable openness. It’s a wonder to see how it all comes together. WaterColor’s transparent quality always makes me curious about the painting process especially. There’s no room for mistakes. Every stroke of the brush shows up clear and true, like a declaration. Thus, the artistic process takes extra care in WaterColor’s case. That’s what makes it so cool for Antonio to share it with us. All the while he brushes tender truth and profound themes onto paper.

Themes deepen WaterColor by Antonio. Take the painting above with its Falling and Resilience veins. There’s a clarity to the image. A figure falls as another, nude person, seems to catch them. Although a simple idea, the painting’s anything but. For instance, there’s vulnerability in falling as well as nudity. The naked figure plays savior in this painting, though. This points to the strength in vulnerability. In fact, both figures seem tensile tough. The one dressed in purple glides with ease. His face appears fearless. This could be falling in love rather than into a pit of vipers. Still, the figure’s vulnerable either way. One’s just much more fun.

Let’s check in on what Antonio González García has to say about this painting. The video below comes direct from the painter. He talks about The Beginning of Falling and Resilience. You can see his relaxed and open manner. This shines through even in García’s most intense work.

My favorite WaterColor by Antonio is actually three-in-one. His 2019 triptych. There’s Consciousness (The Awareness) to the left. Hedone (The Passion) in the middle. And Aletheia (The Messenger) to the right. If you’re not up-to-date fresh on the Greek gods, this might not seem intuitive. Here’s a quick refresher. Hedone represents the Greek god of pleasure. She’s daughter to Cupid and Psyche. So, how could she be god of anything else? Aletheia, though, bears a more complicated Greek god job. She’s the lightbringer. That’s a euphemism for midwife. Taken as a symbol, Aletheia travels between the conscious and unconscious world. After all, what is birth if not an awakening of the conscious self?

Thus, complex layered themes are built into this work. The paintings have the depth of layered watercolor too. This triptych might be my fav Watercolor by Antonio painting simply because it explores these themes. I discuss a similar relationship between worlds in my Lott House piece. There’s also an element of this in my love for meditation. So, it hits close to home for me on topic. But gorgeous also matters. The glorious lines and colors in this trio reverberate beauty. They’re rich with fantasy elements. But clean lines keep the imagery fresh and current.

Awareness in WaterColor By Antonio

These three portraits also work as individuals. My heart swells for Consciousness/Awareness the most. At first glance, it might even be a self portrait. The man has dark tendrils much like Antonio’s. But on closer examination this figure doesn’t seem like a man at all. It’s not just the crack through to his heart that sets him apart. Though that does give him a granite statue quality. He’s also a bit too perfect – like a god. There’s a sense of awakening to him, as if he’s seeing Hedone/Passion for the first time. She’s not looking back. Still he stares, ultra-aware of her. But he also isn’t paying any attention to the crackled pierce stabbing toward his heart. This man radiates awareness while unconcerned about himself. He’s far too ideal to be real. This one’s god-like. The other two are actual gods.

This figure represents what’s inside us all. After all, everyone has the capacity for Consciousness/Awareness like this. We can become this mindful of others and detach from our ego, as this god-like man does. It takes full awareness; this painting points out. That’s the essence of true love. It thrives beyond selfish desire.

Watercolor By Antonio – Passion & The Messenger

Hedone/Passion tells a different story. She lies in the triptych middle, an essential element. Without her the creation story can’t happen. That’s true in both the metaphorical and literal sense. Passion remains essential to creation – at least when it comes to mere mortals. We must at least care to make things happen in art. Passion’s got a snake wrapped around her. In fact, you can see this up close in the headline shot for this piece. So, this god wears a slithering friend along with her coy expression. She’s not innocent – just necessary.

At last, the mysterious Messenger/Aletheia sits on triptych right. This masked creepster peers over a hawkish nose at the other figures. Creepy because Aletheia wasn’t just a messenger in her Greek myth. She’s sometimes also the villain of the story. In that darker version her mother (Hera) sends her to kill a rival. Hera believed this nemesis would be an easy target during birth. In fact, she hoped to destroy both mother and child. Aletheia went on this mission, determined. But a surprise foiled Hera’s plan. So, the baby was born after all.

Aletheia thus became the goddess of childbirth. However, a dark stain remains on her reputation. Greek myths take character intent to heart, to the bank, and to the grave. Her role as assassin still clings to Aletheia like a barnacle. This shadow side of the god also comes through Antonio’s painting. We can feel the intensity of Aletheia’s gaze. She seems threatening while still distant – pulled aside from the other figures. But the birds signify messages.

There are also birds in Consciousness/Awareness. So, we see that these two are connected by more than just the Passion between them. This pulls the triptych together into a complete set. Emotional resonances flow through all WaterColor by Antonio. That’s thanks to his imagery, theme, and powerful lines. These make for powerful paintings – even with delicate watercolor brushstrokes.

Check Antonio González García’s work and process videos on Instagram. He’s one of my favorite artists to follow. That’s because Watercolor by Antonio shares at every step of creation. This openness remains rare in the art world. You can also see him at one of his exhibitions. Check out his website, https://watercolorbyantonio.wordpress.com, to find out what’s coming next in his WaterColor world.