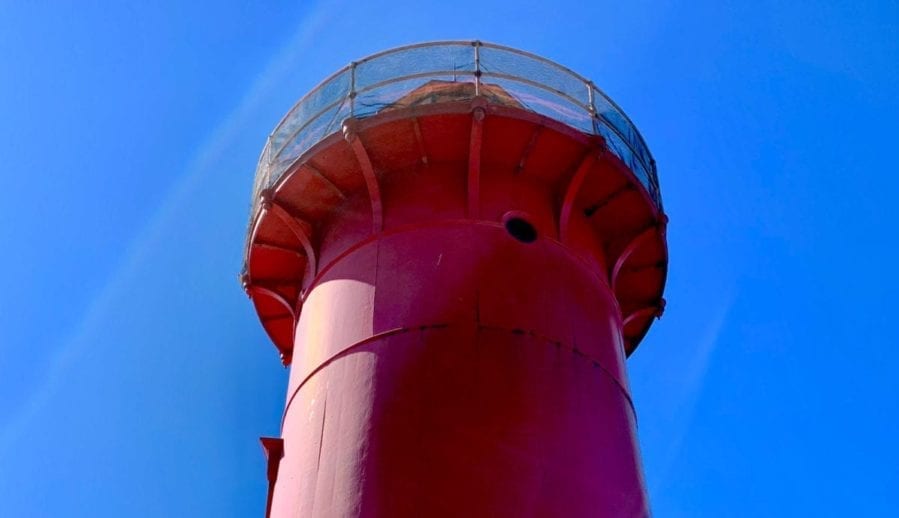 The Little Red Lighthouse saved lives along the Hudson River for many years. Before it… in the 1800s, the river teemed with boats and canoes doing New York City business. But many crashed into a dangerous, jutting land mass, Jeffrey’s Hook… That is, until your Little Red came along. They call her the Little Red Lighthouse because she’s only forty feet tall and the color of fresh pomegranate. In fact, this lighthouse packed powerful impact into her small parts.

Love listening more than reading? Click below for the audio version:

Before Ms. Lighthouse the city made paltry attempts to protect Hudson River boats. They had to. That’s because many power brokers in New York history were plantation owners. For instance, Philipsburg Manor, discussed in a previous post. They produced massive quantities of flour. Some of it shipped overseas where flour was rare. The rest, their prized slave, Diamond, canoed solo down the Hudson and sold in Manhattan. This was an arduous journey. It’s hard enough to balance giant flour sacks in a tiny canoe for more than eight hours. Imagine how much worse it would be to also encounter an unexpected jetty. Many boats exactly like Diamond’s crashed into Jeffrey’s Hook.

It was busy and treacherous business traveling the river. But above all it was business. That means money. The Hudson grew crowded with trade. More and more boats filled with valuable workers and goods crashed. The richest echelon of society thus squawked. The louder they clamored, the bigger a priority Jeffrey’s Hook became. In fact, it got pretty raucous because the city’s initial attempts to make it safer were ridiculous.

At first, someone erected a red pole over the river as a signal. It was, of course, ineffective. They then added a light with the illumination equal to ten candles. This cobbled together semi-solution didn’t have much effect either. So, they added another light (pictured below). Alas, this marvel of ingenuity also didn’t get the job done. The concerned neighborhood didn’t have the resources or knowledge to solve this escalating crisis. It was time for the powerful to intervene.

The US Lighthouse Establishment bought Jeffrey’s Hook in 1896. This arm of the Coast Guard purchased the jetty and surrounding area which later became Fort Washington Park. The new owners might’ve scared away some. But this was an opportunity for wealthy landowners. Their letter-writing campaigns kicked into hardcore mode. Government workers open mail. Primed to express their consternation – they rallied. After all, they’d waited more than a decade from the red pole to this point. Their workers died. They lost money. It was about time somebody found a real solution. Thank goodness the Coast Guard discovered Little Red.

That’s right, they didn’t build Little Red. They found her. In fact, she was being replaced at Sandy Hook, her flagship. So, her move to Fort Washington was a win-win all around. This lady lighthouse had hit rock bottom. The Coast Guard had a new, bigger, better lighthouse prepped for Sandy Hook. They took her apart in 1917 and put the parts in storage. She was off the market. There’s no better salve for such massive rejection than a life-saving mission. It feels good to be desired. But when lives are on the line, that’s deeper than desire. That’s need, baby.

After five years in storage, the city put Little Red back together. It was time for her to stop all those deadly Hudson River traffic accidents. The US Lighthouse Establishment erected her in 1921. Some might say too little, too late. She is little. That’s a fact. But it’s never too late to save lives.

Even with the Coast Guard behind her, the Little Red Lighthouse stayed pretty small time. A part time lighthouse keeper managed the battery-powered lamp. They shone a warning light and rang the fog bell to keep the Hudson safe from Jeffrey’s Hook for 27 years. It worked. Small as she is, Little Red saved people and cargo. That’s no small feat. So, it may be a surprise that she only worked for 27 years. She did a great job with few resources. They loved the Little Red Lighthouse.

So, why did they extinguish her light? Turns out, it had nothing to do with her. In fact, she’s still standing right there at her Fort Washington spot. That’s because it wasn’t another lighthouse that turned off the Little Red Light this time. It was a Great Gray Bridge. The George Washington Bridge lit the river and even the sky as soon as it hit the scene in 1931. The city so loved the Little Red Lighthouse, though, she continued to shine until 1948. It wasn’t until 1948 that the Coast Guard put out her light. They wanted to put her up for auction.

But she had a fanbase. They loved the 1942 book, The Little Red Lighthouse and the Great Gray Bridge, by Hildegarde Swift. Little Red was a star and nobody can extinguish such a potent light. At least not when masses of little kids protest the notion. The fans of the Little Red Lighthouse shouted as loud as the wealthy landowners of yore. So, they won. The Coast Guard gave the lighthouse deed to NYC Parks and Recreation in 1951. Even better, Little Red became a designated landmark in 2002. She continues to shine as a star atop Manhattan. It’s such a fun place to visit. If you love walking along the river, she’s at the very top of the esplanade in Washington Heights.

What’s most special about the Little Red Lighthouse? Words can’t explain it. Much like reading her book, you enter another world through her metal door. She’s an experience. Once a year the NYC Parks Department celebrates her with a festival. It’s family fun. But also cool on your own. The tour stories will make you laugh. But it’s the view that’s truly breathtaking. Even inside when you climb her twinkle lit spiral staircase, the view astounds. It’s such a special place. Historic, idyllic, and one in a million. Visit the Little Red Lighthouse and see for yourself.

Thanks to my partnership with Historic House Trust of NYC, I got a super special visit. The Little Red Lighthouse is just one of their 23 historic home sites across NYC’s 5 boroughs. Travel 367 years of history right along with me! Check ‘em out on Instagram and at their website – https://historichousetrust.org. I’d love to see you at one of their fantastic sites. Each visit brings new experiences and gripping stories that stay with you. I’m so grateful to HHTC for all the incredible work they do keeping history alive. They make it such fun!