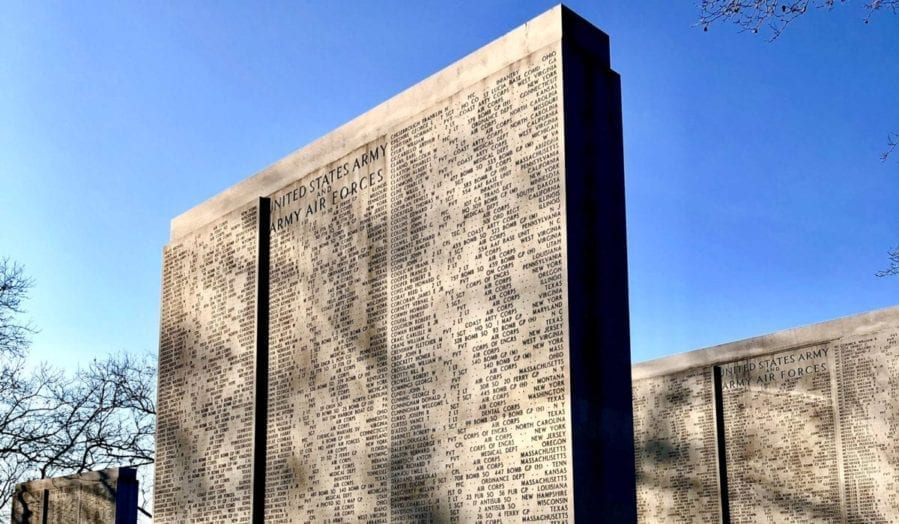 Veterans Day only comes once a year. But memorials are with us every day. In fact, Battery Park in lower Manhattan teems with Veterans Memorials. The most poignant drowns a Merchant Marine daily. Nearby, a soldier’s silhouette serves as tribute to Korean War Veterans. Just around the corner from there, an eagle lifts its wings. This glorious bird’s at the helm of stone tablets reaching to the sky. Each granite block lists the names of veterans lost in WWII – organized by military branch. They call this eagle-eyed area the East Coast Memorial.

Rather listen than read? Click below for the audio.

Out on the water at Pier A sits this poignant memorial for American Merchant Mariners lost during World War II. It’s where every day a bronze serviceman drowns with the Hudson River tide. The sculpture honors Merchant Mariners in particular. That’s because they suffered more tragic losses in the second world war (1 out of every 26) than any other military branch. Sculptor Marisol Escobar crafted this heartfelt piece of the Pier A horizon in 1991. Come see how touching it is at high and low tide. Battery Park holds many incredible Veterans Memorials and landmarks. The artistry of this one’s inherent sadness captures your soul.

The saddest part of all – it’s based on an actual event. Veterans memorials come in many forms. This one is narrative. It tells a story. The SS Muskogee, hit by a German submarine’s torpedo, lost many Merchant Mariners. Reinhard Hardegen, captain of that enemy sub, took a picture of the mariners trying to save one of their men. Sculptor Escobar then based her bronze creation on his photo. It’s a stark and mesmerizing tableau.

That’s because the daily experience of these bronze men gives the memorial heart. The helpless sailor in the water drowns in the bay with each high tide. His fingertips reach desperate but falling short. Thus, he dies twice a day. The memorial says the Muskogee men were; “left to the perils of the sea, the survivors later perished.” It’s unforgettable, no matter what time of day you visit the site.

This Veterans Memorial haunts viewers in a different way. It’s a profound testament to the emotional impact of war. Many call the Korean War (1950-53) The Forgotten War. But a visit to this 15 feet of granite stele resonates long after you leave its location. That’s because it’s a simple evocation. We all know that empty-inside feeling. At the same time, it’s also clear that soldiers know its desolation well. War is war. No matter how long it lasts. No matter where. War tears people apart. It often leaves them a shell of their former self.

Artist Mac Adams created this tall emblem of loss in 1991. Some call the statue “The Universal Soldier”. Its silhouette calls out to all lost soldiers. Some lose their lives. For others an emotional toil weighs them down long after returning home. The void within this sculpture refers to both death and that intangible loss of trauma. It’s a pure rendering of these tragic realities. Visitors can look through the statue at different angles. On one side you can see the Statue of Liberty. On the other, One World Trade Center rises in the distance. It’s a truly profound placement.

The grandest tribute in Battery Park by far, this World War II Veterans Memorial faces the Statue of Liberty head on. An 18 foot tall bronze eagle surveys granite columns with patriotic pride. Though the bird weighs five tons, she lifts our spirits. It’s a fitting feeling because each granite pylon lists the names of soldiers lost in WWII. There are more than 4,600 here, all lost in the Atlantic Ocean during the war.

President John F. Kennedy dedicated this memorial on May 23, 1963. The grand scale of this spacious tribute feels sacred. In fact, information about this memorial often cites the space as a “cemetary”. Many Veterans Memorials seem this way. Here, that could be because the granite slabs seem headstone-ish. But it doesn’t feel like a funeral here. It feels fantastic. In New York City there’s nothing more premium than space. Manhattan gives these soldiers the highest possible honor – massive space. In this case, the area grants a sense of placid, uplifting grace. These heroes were lost to us. But here’s a spot where we can find them in our hearts and minds again.